Introduction
Comprehensive information about Polish geothermal resources provides seven geothermal atlases of different part of Poland issued by the Department of Fossil Fuels at the Faculty of Geology, Geophysics and Environmental Protection, AGH University of Science and Technology in Krakow over the years 1990-2013 (Górecki (ed.) et al., 1990-2013). For many years the Department has conducted scientific research and has issued a lot of publications related to the occurrence of geothermal waters in sedimentary basins of Poland. Geothermal energy resources are analysed and technologies for development of geothermal water resources are examined by the Department in the Polish Lowlands, Carpathians and Carpathian Foredeep.
Hot groundwaters represent carriers of environmentally clean energy which can be important for numerous regions in Poland. Similarly to other European countries, Poland has natural sedimentary-structural basins filled with geothermal waters of diversified reservoir temperatures, from 20 to 80-90°C, in some cases even over 100°C. The country is characterized by significant low-enthalpy geothermal potential, connected mostly with the Mesozoic sediments. In 2013 the last Atlas (Górecki (ed.) and Hajto et al., 2013). connecting with Polish sedimentary basins has been published thereby closing the series of Geothermal Atlases of Poland.
Geothermal waters can be utilized for heat production used in houses and industrial buildings, greenhouses, agriculture, for generation of warm water, and for therapeutic and recreational purposes. Use of ecologically clean geothermal energy resources is real and economically justified in vast areas of the Poland.

Geological background of geothermal water resources in Poland
From the geological point of view Poland is situated at the interface between three main European geostructural units (Figure 1):

Each of these structures is characterized by distinct geothermal conditions, both in Europe and Poland. Sedimentary rocks covers almost throughout the territory of Poland, exception is the area located in SW of Poland (Sudets Mts.) where mostly crystalline rocks occurs.
Based on seismic investigations, the total thickness of the sedimentary cover in the deepest area of the Palaeozoic part of the basin can reach as much as 20 km (Guterch et al., 1997). The area of the East European Craton (EEC) is characterized by a thin, about 1–2 km thick sedimentary cover. In the region of Mazury–Suwałki elevation (NE Poland), the depth to basement is only 0.3–1 km but increases southwestwards to 7–8 km along the margin of the EEC. In the area of Poland the Teisseyre–Tornquist Zone (TESZ) the sedimentary layer attains thicknesses of up to 9–12 km. Its upper parts consist of Permian and Mesozoic sequences that reach maximum thicknesses of 7–8 km, whereas Devonian and Carboniferous epicontinental deposits form its lower part.
Variscan consolidated crust with a 1–2 km thick sedimentary cover. The Variscan crust (Palaezoic platform) has a much simpler structure than the crust of the EEC and TESZ, due to the absence of a high velocity lower crust (Guterch and Grad, 2006).
The basement of the Permian-Mesozoic sedimentary basin within the Palaeozoic Platform consists of Carboniferous, Devonian and older formations, folded during the Variscian Orogenesis. The large Mesozoic sedimentary basin was deformed during the Laramide tectonic phase between the Cretaceous and Tertiary periods. During this phase the plastic salt layer was pressed up to the surface, piercing almost 6 km thick overlying Triassic, Jurassic and Cretaceous deposits. Increasing tectonic movements split the basin into two subbasins: the Szczecin-Lodz synclinorium and the Grudziadz-Warsaw synclinorium. Between them the Central-Polish anticlinorium was formed. Mesozoic structures were eroded after this deformation, and later covered by flat-lying Tertiary and Quaternary horizontally lying sediments (Hajto and Górecki, 2010). In the Carpathians, sediments reaching to depths of some 20 km (Guterch and Grad, 2006).
Regional studies conducted for years at the Department of Fossil Fuels of the UST-AGH shows that the most prospective areas of geothermal energy utilization for heating purposes including GEODH in Poland are connected with the Polish Lowlands and Podhale area (The Western Carpathians). Water in these areas are characterized by favourable temperatures (even above 90°C) and relevant value of discharges of wells (to several hundreds m3/h). Low discharges of wells is the fundamental problem in the rest of analyzed regions (The Carpathian and Carpathian Foredeep areas). The main resources of geothermal waters in the Polish Lowlands are related with the Mesozoic formations, where particulary the most promising are Lower Jurassic and Lower Cretaceous formations. Significant resources of geothermal energy are accumulated also in the Upper Jurassic, Middle Jurassic, Upper Triassic and Lower Triassic formations, but their characterize by significantly less geothermal potential when heating purposes are considered. 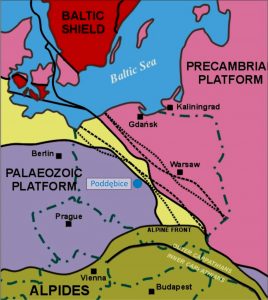 Within the Lower Jurassic aquifers permeable rocks constitute 40-80% of the total thickness of the Liassic sequence. The temperature of geothermal waters divers from those typical of subsurface waters to 120°C at the depths, below 3000 m. – (axial part of the Łódź Trough). The TDS of Lower Jurassic groundwaters is closely related to the depth of occurrence and change from few to over 200 g/dm3, however, in the whole aquifer dominating are values from 10 to 100 g/dm3. In most part of Lower Jurassic aquifer discharges over 100 m3/h can be expected.
The second of regional scale relevance with a significant extent aquifer in the Polish lowlands is the Lower Cretaceous aquifer Total thickness of Lower Cretaceous formation varies from several to over 400 m with dominating values between 20 and 200 m. Geothermal water temperatures varies from 20 to over 90°C. Highest temperatures were observed in the north-east of Konin. Regional analysis of hydrogeological data sets indicates that potential discharges of wells varies from beneath 25 m3/h, to over 100 m3/h (Górecki (ed.) and Hajto et al., 2006a).

Geological background of Poddębice geothermal project
The Poddębice GT-2 well is located in the central part of Permo-Mesosoic geological unit called The Mogilno-Łódź trough, which is a part of bigger syncline structure – the Szczecin-Łódź-Miechów trough, extending from the fore-sudetic monocline to mid-Poland swell. From SE, the Łódź basin borders with Kujawy swell, a tectonic unit with strongly developed salt tectonics. From NW, the basin touches the Mogilno through.
Geological structure of the Łódź basin is complex, what is mainly connected to the salt movement. This phenomenon causes local disconformities, rapid changes of sediments’ thickness, especially in proximity of anticline structures, that were formed here during upper Triassic, upper Cretaceous (Coniacian) and during cusp of Cretaceous and Paleogene. Creation of anticlinal structures in the Poddębice area was caused by underlying salt layers tectonic dislocations that used to be active during sedimentation of Mesozoic rocks. Incomplete development and small thickness of surroundings salt pillows sediments, eg. Lower Cretaceous formations was caused by regional salt tectonics where salt structures are penetrating or uplifting Cretaceous layers, among others – salt anticlines of Koło and Poddębice (Figure 2). 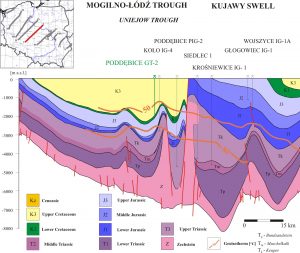 Geological cross-section through the Polish Lowlands, with location of Poddębice GT-2 production well
The Łódź basin area was crossed by an axis of maximal subsidence of Upper Cretaceous basin. Thus, its sediments in the Poddębice area are of its maximum thickness, approaching up to 2600 and 3000 m (near Koło and Turek, respectively), whilst in the Poddębice vicinity ca 1952 m.
Rock formations aged from Triassic to Quaternary are present in geological structure of described area. The oldest recognized sediments are fine-grain sandstones and mudstones of lower Triassic, interbedded with limestones, underlying by Zechstein formations. Overburden consists of evaporite-clastic series of Röt, composed of anhydrite, dolomite and mudstone layers. Muschelkalk is developed as pelitic and marble limestone facies. Upper Triassic is build up with fine-grained sandstones with clayish interlayers, melting into claystone. The series of pelitic sandstone with uncommon mudstone interbeds close Triassic sedimentation. Total thickness of Triassic formations reaches about 2000 m.
Above Triassic occur strongly reduced Lower Jurassic (Lias) sediments, which thickness of c.a. 37 m, mainly developed as sandstone with claystone interbeds.
The Dogger (middle Jurassic) is represented by dolomitic mudstone, shading into glauconite sandstone. The Upper Jurassic (Malm) formations are thicker, up to 600 m, and are developed in carbonate facies – limestones, marbles and dolomite, mudstone and collaterally – sandstone. The Poddębice GT-2 well reached top of Upper Jurassic formations, formed as limestone facies, represented mainly by light-grey marbles and marble limestone, locally containing sand. Top of Upper Jurassic was reached at depth of 2072 m beneath the surface.
Deposits of the Lower Cretaceous formations in the Poddębice area lack of older stratigraphic stages. The profile starts with Hauterivian, formed as clay-mudstone facies. Occuring here dark fuscous mudstones are interlayered with claystone, are sediments specific for shelf part of sedimentary basin. Insubstantial is thickness of Hauterivian equal to 7,0 m. Hauterivian deposits, together with Upper Jurassic marbles constitute natural sealing between geothermal reservoir in overburden and Jurassic aquifer.
Over Hauterivian present are grey fine- and medium-grained, sandstones of terrigenous origin, constituting geothermal aquifer complex of Albian, Aptian and Barremian stages. In the
Poddębice GT-2 well, sandstone had been confirmed at depth interval 1962 – 2063 m beneath the surface, with claystone interbed in the interval of 2001 – 2004 m. Top part of the sandstone, id est part above the interbed, contains rock skeleton of high purity with locally occurring glauconite, and is characterised by better reservoir parameters (porosity of 17%). In lower part of the profile, that is deeper than 2027 m beneath the surface, present are interlayers of mudstone, quartz grains are smaller, whilst porosity is of about 14%. Clay content in the footwall of the sandstone reaches level of 23%. Thickness of sandstone layers is 98 m (considering clay interbed of 3 m thickness).
Deposits of Upper Cretaceous – mainly marbles, creamy-grey limestones and marble limestones, locally with dark fuscous claystone occur in the depth interval 10,0-1962,0 m beneath the surface. Cenomanian is represented with specific limestones and creamy marble limestone, which together with Upper Albian. Turonian is dichotomous/bipartite: bottom part is marble-clayish, whilst top part is marble-limestone. Upper Turonian deposits are marked with presence of silica rocks (flints) within marble limestones and marbles. Coniacian, Santonian and Campanian complex are layers of alternant marble limestones and marbles of grey colour.
Maastricht, the latest part of Upper Cretaceous, is represented only by its earliest facies, later deposits had been eroded. Maastricht formation mainly consists of marble limestones with marble claystones and marble mudstones in the overburden. At depth of 10,0 m beneath the surface Cretaceous formation reaches its top and is covered by yellow, medium-grained sand. The vicinity of the Poddębice GT-2 well lack of Paleogene and Neogene deposits. Their erosion have been caused by glacial processes, intensity of this process was increased by uplifting Mesozoic formation.